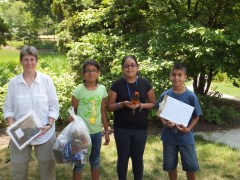 A few months ago we reported on the highly creative and advanced work of one of our youth programs called Cool Summer Experience (CSE) based in Waukegan. Well, they’re back with Issue 2 of the ECO-Times, a comprehensive wrap-up of everything they got into this past summer. Highlights include a tour around Lake Michigan on the W. G. Jackson aquatic research vessel, a trip to the Dokum Mskoda Nature Preserve to track down the elusive Eastern Prairie Fringe Orchid, and an encounter with enormous butterflies at the Chicago Botanic Gardens. Read all about it… The ECO-Times, Summer 2013

Elizabeth Bishop (1911-1979) is widely regarded as one of America’s most important and enduring poets. Born in Massachusetts and raised in Nova Scotia, she traveled widely as an adult, spending extended periods in France, Florida, and Brazil before returning to New England in the later part of her life. Geography and locale are common subject matter in her poems, which often arrive at powerful, subjective realizations from a close, detailed look at the objective world.  Perhaps no Bishop poem so explicitly investigates her fondness of geography better than “The Map,” the first poem from her collection North and South, winner of the Pulitzer Prize in 1956.  In this poem, the reader joins the narrator/poet pouring over a map, delighting in its nuances, and ultimately reveling in its beauty.

Land lies in water; it is shadowed green.
Shadows, or are they shallows, at its edges
showing the line of long sea-weeded ledges
where weeds hang to the simple blue from green.
Or does the land lean down to lift the sea from under,
drawing it unperturbed around itself?
Along the fine tan sandy shelf
is the land tugging at the sea from under?

The shadow of Newfoundland lies flat and still.
Labrador’s yellow, where the moony Eskimo
has oiled it. We can stroke these lovely bays,
under a glass as if they were expected to blossom,
or as if to provide a clean cage for invisible fish.
The names of the seashore towns run out to sea,
the names of cities cross the neighboring mountains
–the printer here experiencing the same excitement
as when emotion too far exceeds its cause.
These peninsulas take the water between thumb and finger
like women feeling for the smoothness of yard-goods.

Mapped waters are more quiet than the land is,
lending the land their waves’ own conformation:
and Norway’s hare runs south in agitation,
profiles investigate the sea, where land is.
Are they assigned, or can the countries pick their colors?
–What suits the character or the naive waters best.
Topography displays no favorites; North’s as near as West.
More delicate than the historians’ are the map-makers’ colors.

The following picture and caption was sent in by Brooklyn-based poet, Sarah Jean Alexander:

I found this photo at Postmark Cafe in Park Slope [Brooklyn]. I thought it was funny how they seem to completely disregard the Chesapeake Bay. I grew up in a town right on the bay, about a hundred miles north of the most northern tip of where the map’s Chesapeake Bay ends. I’m laughing right now looking at this map again. The panhandle that links western Maryland  to the rest of it is literally only a mile wide. It’s so fat in this picture. Also why is Baltimore almost inside of Pennsylvania?