The United States is in the last leg of the 2016 Presidential Election and, as November 8 approaches, “The Race to 270” is on. But what does this phrase mean? How does is apply to the everyday voter? And what role does geography play in this race?

“The Race to 270” refers to the number of votes a presidential candidate must win in the Electoral College to secure the presidency. There are a total of 538 members in the college and, to become president, candidates must earn 50% + 1 of their votes. Electors are appointed by their state and the number of electors is equal to their state’s number of representatives in Congress, giving each state a minimum of 3 (accounting for two senators and at least one representative in Congress per state). 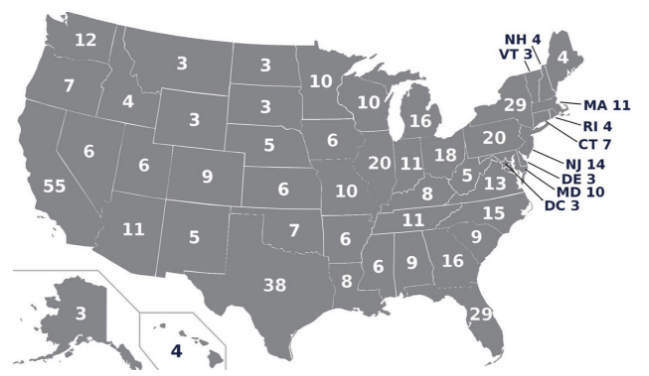 Rather than voting directly for their desired candidates, citizens cast their ballot to the electors, telling them who to vote for. Based on this popular vote, the state’s electors put all their votes toward the majority candidate. Even if the candidate wins by only 51%, state’s “winner-take-all” policy dedicates that all the state’s electoral college votes can only go to the majority winner.

This applies to all states except Maine and Nebraska, who use Congressional Districts to determine electoral votes. Maine has four electoral votes and two congressional districts: the winner of each district gets at one vote and the statewide winner automatically gets two of the four. Nebraska, with its three electoral votes, has a similar system: the statewide winner gets two votes and the district winner gets the third. It is possible for the votes to split, which is important to note in a close election like this years.

While this sounds pretty straightforward, there are some problems with this system:

While the Electoral College has its problems, every vote counts in an election. The deadline to register online or by mail in Illinois is October 12 so make sure you are registered and make your voice heard on November 8.

Questions about how to vote in Illinois? Click here for a video explaining IL deadlines, absentee ballots, and more!

For more information on the Electoral College, see the videos and articles below:

A Breakdown of the Electoral College: http://nationalgeographic.org/maps/electoral-college/

How the Electoral College Works: https://www.youtube.com/watch?v=OUS9mM8Xbbw

The Trouble with the Electoral Collage: https://www.youtube.com/watch?v=7wC42HgLA4k

History of US Elections: https://www.youtube.com/watch?v=48EZKXweGDo