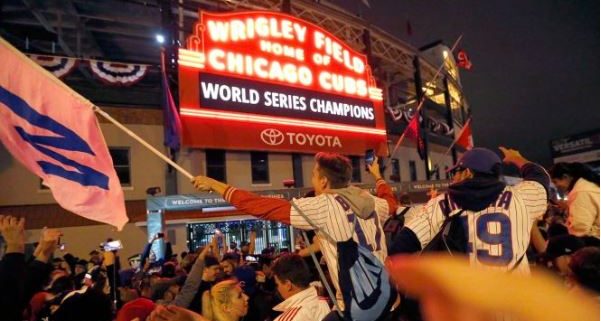 Last week, the Chicago Cubs made history by winning their first World Series in over 100 years. The famous “Billy Goat Curse” was broken and Cubs fans around the country rejoiced. This victory will go down in history and be as essential to Chicago as the Cub’s stadium itself: Wrigley Field. It’s located between Lakeview and Uptown in the appropriately named Wrigleyville and is one of the oldest stadiums in the Major League. Since it’s construction, Wrigley Field has undergone big changes, massively impacting the surrounding neighborhood and becoming a famous Chicago icon.

Wrigley Field was built in 1914, making it the second-oldest ballpark in the country. Initially called Weeghman Park (after property owner Charles J. Weeghman), the park was built on the grounds of an old seminary at Clark and Addison on the city’s north side. The initial stadium allowed for up to 14,000 visitors. The first game at Weeghman Park was on April 23, 1914 where the home team, the Chicago Federals, played Kansas City. Weeghman purchased the Cincinnati Cubs in 1915, moving the team to its now permanent home. The Wrigley family purchased the Cubs franchise in 1920 and the stadium was renamed in 1926 after Cub’s owner William Wrigley Jr.

Once called Central Lakeview, the area was renamed Wrigleyville to celebrate the park. Unlike many stadiums, however, Wrigley Field is in the middle of a dense residential and commercial neighborhood: therefore, all stadium renovations and changes directly impact the residents of Wrigleyville and interests can often clashes with the team’s ownership. One key example is the long-awaited approval for stadium lights at Wrigley to allow night games. Unlike the White Sox’s Comiskey Park (now known as Guaranteed Rates Field) who gained lights in 1939, Wrigley could only have day games for its first 74 years. Lights were only installed in 1988 after the Cubs threatened to leave Wrigley if the renovation was denied. There are also no official parking lots for the field, making street congestion a constant throughout baseball season. Under its most recent ownership, however, Wriglyville will look very different in the upcoming years.

Since Tom Ricketts’s purchase of the team in 2009, Wrigley Field and the surrounding Wrigleyville has undergone significant change. According to the Chicago Tribune, the current Cubs owner is working with Boston’s Theo Epstein to remake Wrigley and its surrounding neighborhood in the style of Fenway Park, which was built just two years before Wrigley Field. The project is titled The 1060 Project and began at the end of the 2014 season. Learn more about the project here: http://chicago.cubs.mlb.com/chc/restore-wrigley/

Since 2015, Ricketts and his associated businesses purchased 10 of 16 rooftops surrounding the park, where fans have full view of the game from the top of nearby buildings. Huge signs from companies such as Budweiser now stand on the outer perminter of the stadium, bringing large revenues to the team while blocking the view of rooftops that refused to sell. A McDonalds adjacent to the stadium on Clark Street was recently demolished after being purchased for $20 million: now, a hotel is being constructed on the site. Plazas were created on all sides the stadium and will host events both on and off game days. Northwest of the field, a large building for Cubs’ offices and related retail shops will overlook the stadium.

Mark Schlenker, a local rooftop owner, noted that the Cubs ownership made it clear they want to purchase all of the buildings on the east-bordering street of Sheffield Avenue. While Alderman Tom Tunney is optimistic about the economic growth of these plans for Wrigley, there are concerns about how this will affect long-time residents and businesses in the neighborhood. With an average of 40,000 fans in attendance at Cubs games, however, there is a strong draw to diversify and expand businesses in the area. The team will work closely with both Alderman Tunney and Mayor Emanuel as field renovations continue into the upcoming years.

As the 2016 World Series Champions celebrate their victory, it is clear that Wrigley Field (and all of the changes to come) will remain an important part of the Chicago landscape for years to come.

For more information about Wrigley Field and the continuing renovations, please see the links below: