Why is the Ocean Salty?

The Ocean is salty because of dissolved land materials that are deposited into the Ocean through streams and rivers. Stream and river water does not taste salty because it is moving, compared to the Ocean, which is essentially a giant bath tub. The concept is the same for most lake water. The Great Lakes are not salty because the water contained within them is on the move. According to an article by Science Daily, a drop of water in the Great Lakes will stay there for approximately 200 years before it makes its way out to sea, whereas a droplet of water in the Ocean can take up to 200 million years before it goes anywhere! 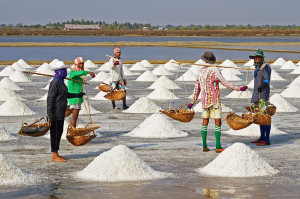 Farming for sea salt in Thailand.

Why are Some Lakes Salty?

The most well-known salty inland lakes are the Great Salt Lake in Utah and the Dead Sea in Western Asia. These bodies of water are so salty because they receive a lot of dissolved river deposits and offer no further outlet for those deposits to go. In addition, evaporation is greater than rainfall in these areas. The more evaporation in an area, the higher the salinity (saltiness of water) will be. Rainfall causes salinity levels to sink. The Great Salt Lake has an approximate salinity of 280 parts per thousand, which is 8 times saltier than the average salinity of the Ocean. The Dead Sea’s salinity is 330 parts per thousand, or almost 10 times saltier than the Ocean. The saltiest known inland body of water is the Don Juan Pond in Antarctica, a very small and shallow patch of water that has a salinity of 440 parts per thousand, which is 12 and a half times saltier than the Ocean! 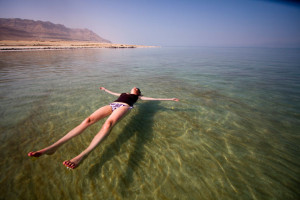 The dense salty water of the Dead Sea makes it very easy to float – without a floaty!

What are the Key Differences Between Fresh Water and Salt Water?

The boiling point of average Ocean water is only slightly higher than the boiling point of fresh water. Fresh water boils at 212 degrees Fahrenheit (100 Celsius), whereas Ocean water boils at 213.1 Fahrenheit (100.6 Celsius). This means that adding salt to your soup or pasta water will actually make the food cook slightly quicker, and it will of course make it taste better! It’s important to add the salt after the water starts boiling, otherwise it will take longer to reach a boil.