As the COVID-19 pandemic shakes the world, GIS finds itself at the forefront of this fight. Geographic Information Systems – GIS for short – is a primary way to map data and disseminate information to keep tabs on this pandemic as it spreads and evolves. The power of GIS is not just being realized, however; since first being coined in 1968 by Roger Tomlinson, it has been known to have applications in nearly every field, from public safety to sustainability to healthcare and beyond. The power of GIS is becoming more apparent to the general public as it is being utilized to document how the COVID-19 pandemic progresses. GIS allows for different layers of data to be shown in a singular map, creating the opportunity to visualize COVID-19 data atop data on race, socioeconomic status, population density, etc. to see any instances of correlation.

This ability to collect data and map it in an effort to disseminate information on COVID-19 is not limited to cartographers and those fluent in GIS. We see many doing what they can to help others at this time, as evidenced by droves of people crafting handmade masks or delivering groceries for others. But for those with GIS skills, there are opportunities to help various organizations via public participation GIS, including Humanitarian OpenStreetMap, GIS Corps, MapSwipe and more (read about their work here). Esri, a leader in the GIS field, has delineated a 5-step plan for citizen scientists to respond to the pandemic, according to its website:

This increase in citizen science is visible on ArcGIS Online, the online version of Esri’s ArcGIS suite of GIS software. When searching “COVID-19” on ArcGIS Online, more than 10,000 results show up, indicating that the public has already taken to the job of mapping the pandemic. Some of the maps are from universities, hospitals, and other institutions, with Johns Hopkins University leading the pack (its COVID-19 map on ArcGIS Online currently has over 52,000,000 views). With this being said, there is always more mapping to be done; there tends to be an emphasis on mapping large cities, leaving smaller towns unmapped. If everyone pitches in and maps what they can using the public participation GIS resources presented here, it would be to the benefit of not only one’s town and state, but to the nation and the world. For more information on how you can engage in public participation GIS and put your skills to use, click here.

For a worldwide map from Esri’s COVID-19 Overview, click here.

For an Illinois-specific map from of Western Illinois University, click here.

Wishing you peace and health, 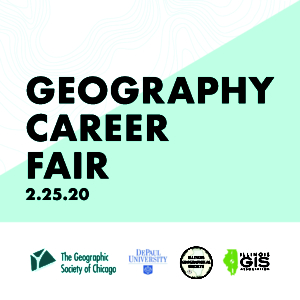 The Geographic Society of Chicago is excited to invite you to its inaugural geography career fair, Career Opportunities in Geography, in conjunction with DePaul University, the Illinois Geographical Society and the Illinois GIS Association. Please join us at this FREE event on February 25th from 5-8pm at DePaul University’s Student Center in room 314. Present at the fair will be employers from the geography field, including Esri, CMAP, MapCorps, Ecolab, Urban GIS, Chicago Metropolitan Agency for Planning, Walgreens, and HERE Technologies. Additionally, there will be a panel of geographers with experience in the field, ready to answer questions and give advice. Panelists include, but are not limited to:

Lucy Stanfield is a GIS Specialist at the US Environmental Protection Agency in Chicago. She creates maps and trains staff on visualizing data and graphics in presentations. Lucy graduated from the University of Chicago (BA) and the University of Arizona (MA), both in Geography. At one time, she planned to be an archeologist, but now focuses on the art and science of maps and how they can best communicate environmental science and information.

Judy Bock is Director of Online Geospatial Programs at Elmhurst College.  In her capacity as director, students often inquire about potential jobs and careers in geography and/or GIS.  She helps students consider the direction they would like to pursue, based on the multiple aspects of students’ interests and skills.  Judy will share a variety of potential job and career opportunities.

This event is not limited to DePaul students or those studying geography; it is open to the public, and students from all disciplines and universities are welcome. This event will provide fair-goers with information on not only potential jobs in the field, but also internships, graduate programs, and other programs. Students, please consider bringing a copy of your resume. Additionally, there will be snacks! Please reach out with any questions, and be sure to register before the event here.

See you at the fair!

It’s been in the impeachment hearings. It’s been in the news. It’s the elephant in the room. Why is everyone mispronouncing Ukraine’s capital city, Kiev? As it turns out, they’re not. Here’s your cheat sheet to the who, what, where, and why behind Kyiv’s change in spelling.

Since gaining independence in 1991, Ukraine has dealt with various issues around naming. In 1995, Ukraine demanded that its most populous city no longer be referred to as Kiev, but instead Kyiv. There are a few reasons behind this change, but they all tie back to Ukraine no longer being a part of the Soviet Union.

Kiev is the English understanding of the Russian spelling, which is stylized as “Киев,” whereas the Ukrainian spelling is stylized as “київ.” With the two spellings being visibly different in their languages of origin, it would only make sense that they are translated to English a bit differently. Ukrainian, not Russian, is the official language of Ukraine, so “Kyiv” is the translation that should be utilized by English-speakers, according to the US Board of Geographic Names (BGN). The BGN operates as a sector under the U.S. Secretary of the Interior. The board’s job is to standardize names to facilitate ease of communication and clarity across cultures. The BGN has been a key player in this fight, and officially standardized Ukraine’s capital city’s name as “Kyiv” instead of “Kiev” back in 2006.

Before demanding that the name of its capital city change, Ukraine had been fighting to be recognized as “Ukraine” rather than “the Ukraine” beginning in 1991. Ukrainians called for the removal of the oft-used “the” prior to “Ukraine” because of its implications about Ukraine’s independence.

There are several theories behind the roots of Ukraine’s name, but a popular one includes “oukraina” as meaning “borderland,” which facilitated it being referred to as “the Ukraine,” or “the borderland.” According to TIME, “The Ukraine is the way the Russians referred to that part of the country during Soviet times … Now that it is a country, a nation, and a recognized state, it is just Ukraine. And it is incorrect to refer to the Ukraine, even though a lot of people do it.” Continuing to refer to “the Ukraine” is problematic for Ukrainians because it centers their entire existence around Russia, depriving them of a sense of national identity apart from Russia.

It’s easy enough to make the change to simply “Ukraine,” but back to Kyiv – how does one pronounce the new spelling? This article contains a pronunciation from Columbia University’s Yuri Shevchuk, stating that “native Ukrainians stress the first vowel, and pronounce it like the ‘i’ in the word ‘kid’ or ‘lid.’ The second vowel is pronounced as a separate syllable, and sounds like the ‘ee’ sound in ‘keel.’ The v is also pronounced a bit differently, like the end of the word ‘low’” (Zraick). It’s a bit different, indeed, but the recording in the article is beneficial for the English-speakers that this change targets.

With all of this in mind, why do so few people utilize the new spelling and pronunciation? For many, it’s a matter of not knowing this change has taken place. For others, it seems to be an issue of old habits dying hard. Business Insider says it best with “I can understand why this argument is infuriating to Ukrainians who want Western media organizations to use ‘Kyiv.’ It’s practically a Catch 22 — the media won’t use that word because no one understands it, but no one understands it because the media doesn’t use it.” However, the impeachment hearings have been a catalyst by which many have become acquainted with the new spelling and pronunciation.

The power of language has been especially prevalent in the media as of late, and can also be seen with Merriam Webster choosing the word “they” as its word of the year. Both of these examples show the transience of language, and that it is sometimes difficult to make a change to things that seem permanent and longstanding. However, all language is created and constantly changing, so it is necessary to appropriately address places, people, and populations by their preferred names.

Go forth and spread the word! #KyivNotKiev

This summer, I was the Geographic Society of Chicago’s intern for the COOL Summer Learning Experience (CLE) in Waukegan, Illinois. Never having heard of Waukegan or CLE, I thought it would be a great chance to explore a new area, learn how to ride the Metra, and keep my GIS skills sharp. Little did I know, I’d leave at the end of the summer having met some amazing students who, might I add, were more proficient in GIS in eighth grade than I was as a freshman in college.

Each year since 2008, this summer education program has provided students with science-oriented experiential learning opportunities, and since 2012, the Geographic Society of Chicago (GSC) has been a part of that mission. In working together, CLE and the GSC are able to provide students with opportunities including field trips, GIS, and this year, improvisational comedy.

I was assigned to help the eighth and ninth grade students, and our main task was to create Story Maps (an interactive presentation-style technology from Esri) to display how Waukegan’s harbor has changed through the years. Story Maps are great tool to bring GIS and mapping to a broader audience beyond those already familiar with these technologies. With this in mind, our final product was three separate Story Maps on the past, present, and future of the harbor. We did this by gathering waypoints of local businesses near the harbor with our GPS units, and conducting interviews with the owners. We uploaded not only our data, but also photos and the information from the interviews to our Story Maps. The Story Maps were also made possible by a technology guru who went by the name of Turtle as well as a helpful volunteer named Dave.

There are many teachers, staff members, and volunteers behind this operation, but the leader of the pack is the caring and benevolent Ms. Coyote (Barbara Waller), who insists that everyone at the camp, including both staff and students, goes by a “nature name.” The concept of nature names had a way of bringing everyone together, and I was excited to be dubbed “Otter.”

At one point, the students were to give presentations on potential career they would like to pursue. As the students were practicing their presentations, their teacher Ms. Butterfly (Kimberly Waller) and I noticed that some of them could use a confidence boost. Once Ms. Butterfly found out that I enjoy doing and teaching improvisational comedy in my spare time, she decided that we could use this to help the students relax and feel confident in what they were saying. I watched their confidence blossom each time we did improv, which translated to them feeling more capable in their speech-giving as well as in their GIS skills.

The community engagement that CLE fosters is unlike anything I’ve seen before; with these students being knowledgeable on their community’s history, it supports them in paving the way for their community’s future. If you are interested in learning more about COOL Summer Learning Experience and its mission, find its website linked here: https://www.clewaukegan.org/