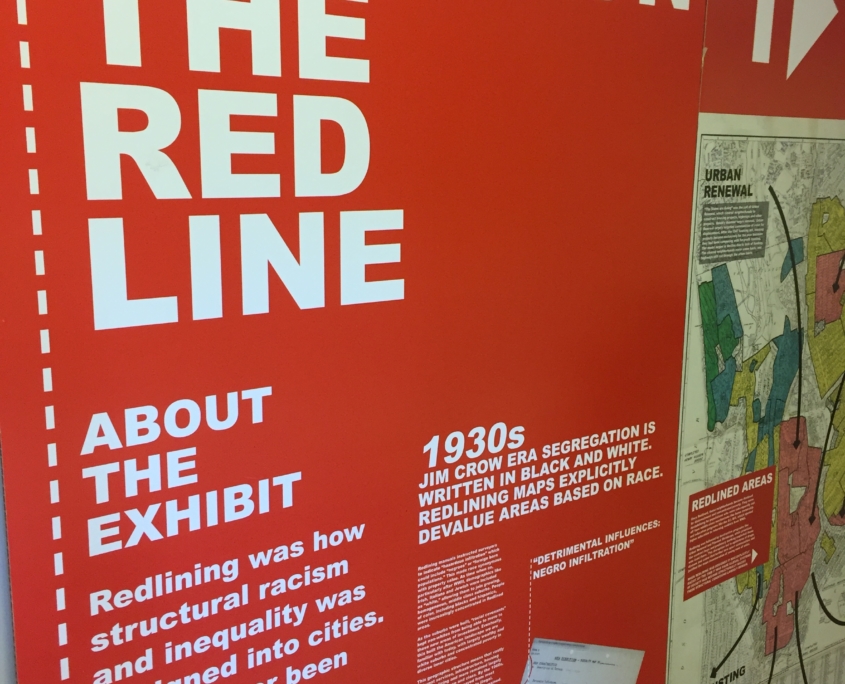 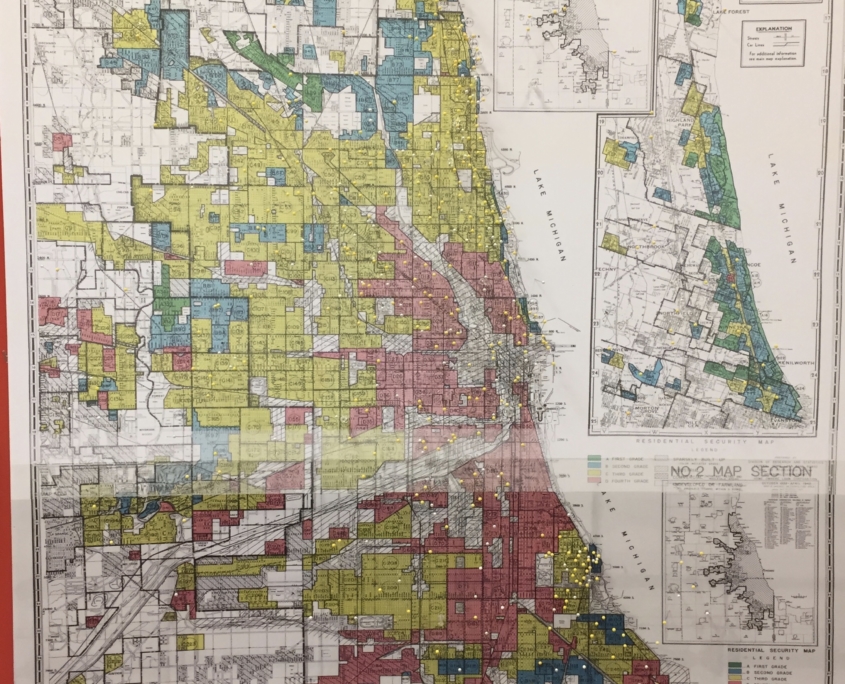 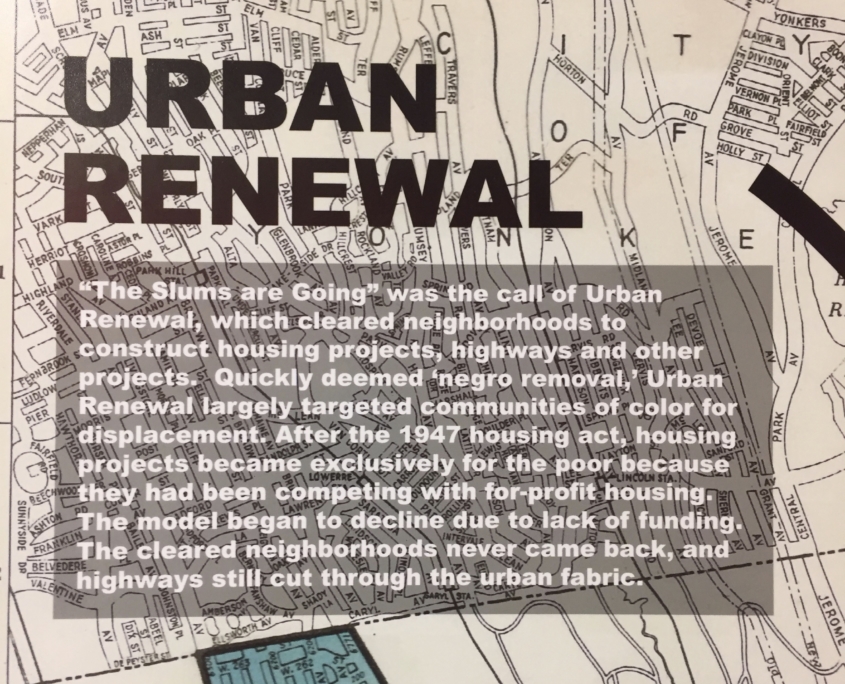 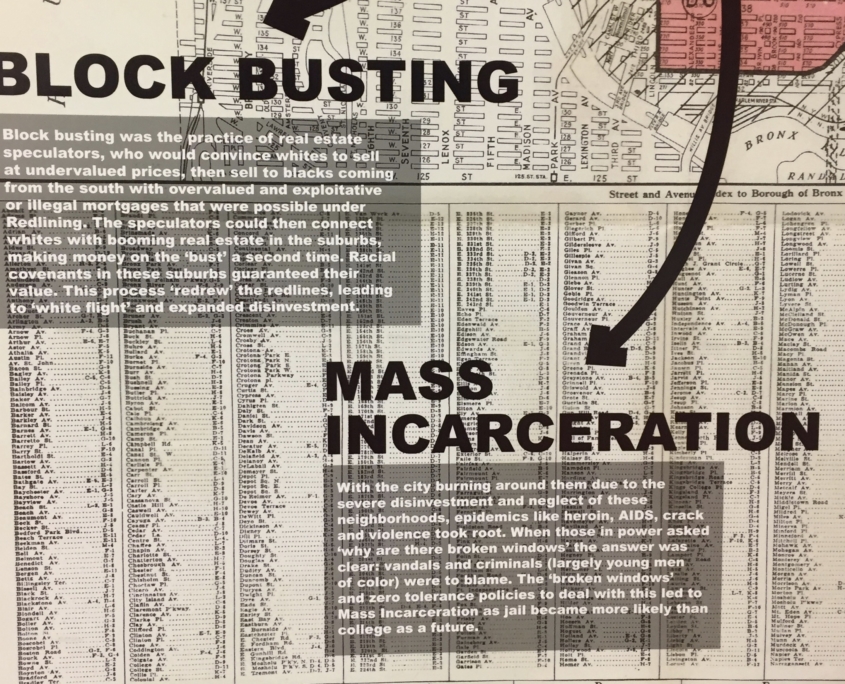 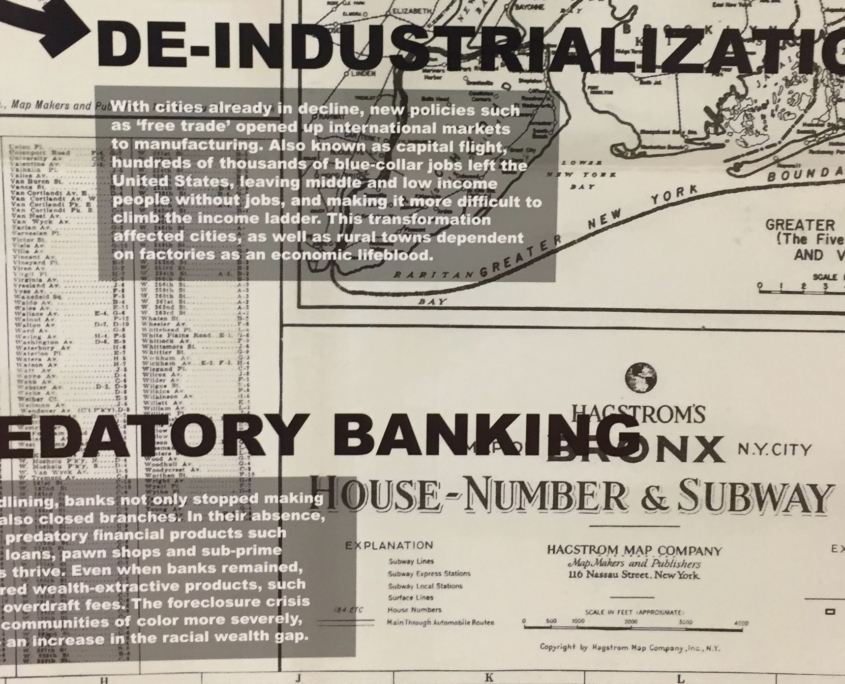 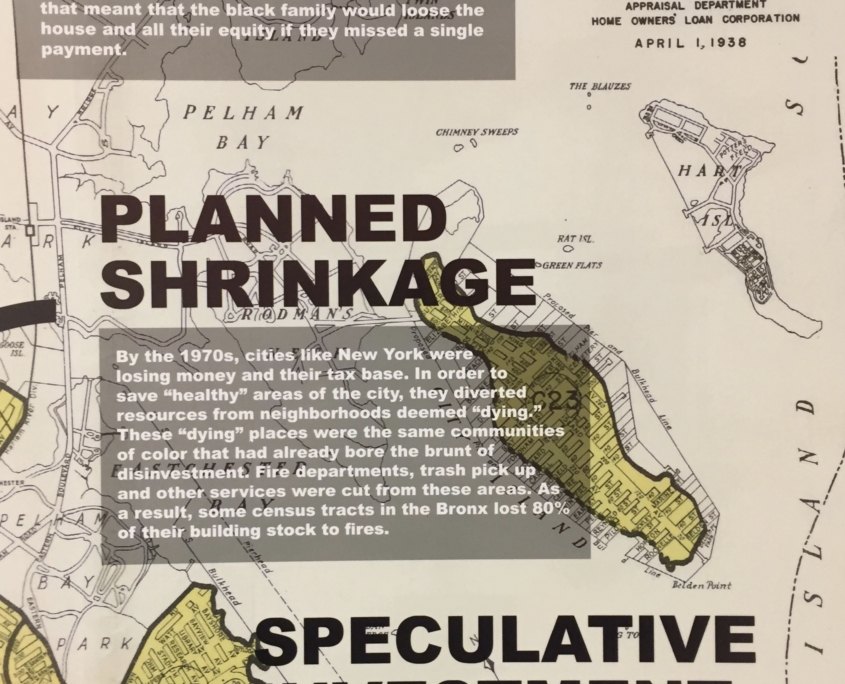 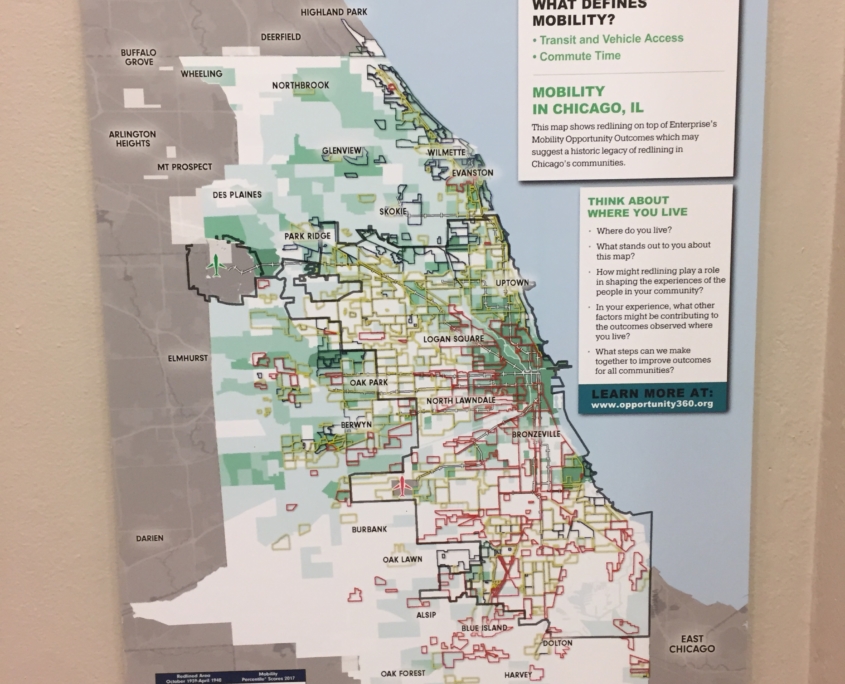 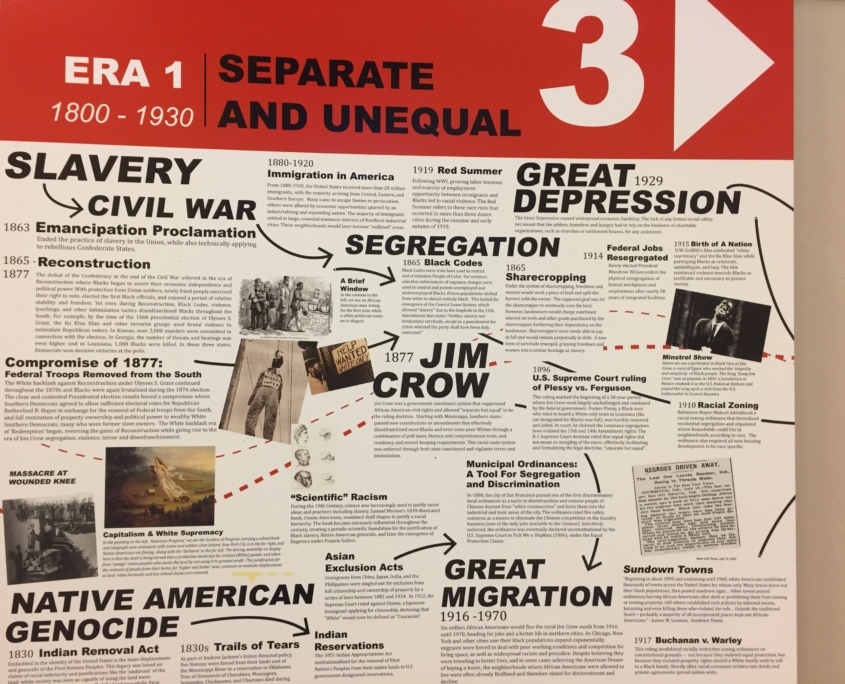 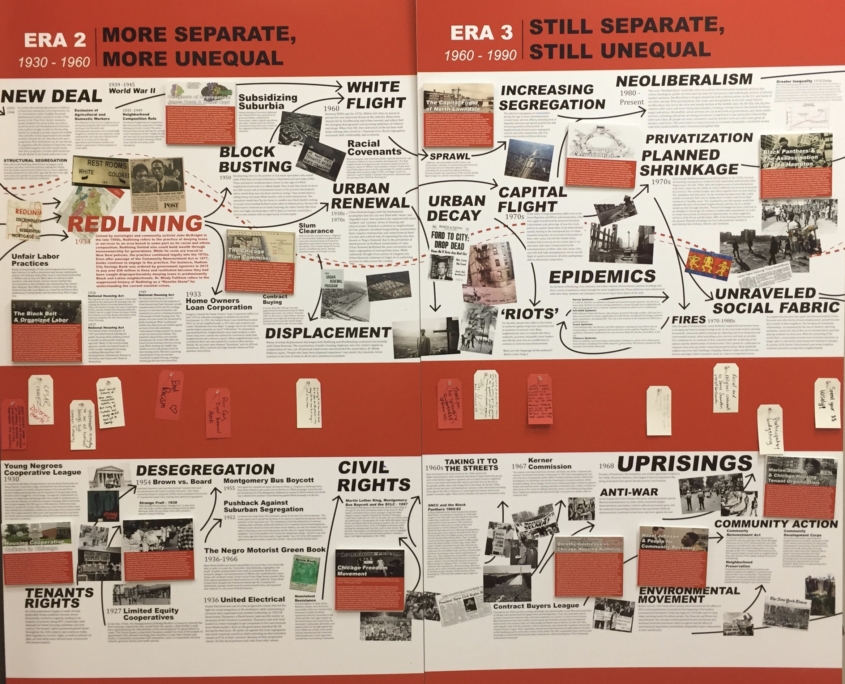 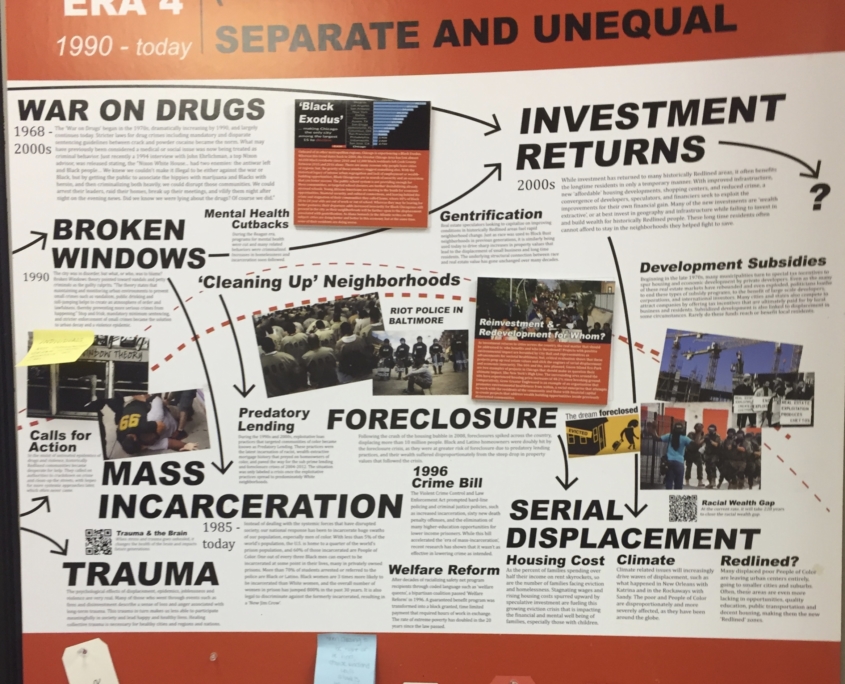 I come to you today to share the “Undesign the Redline” exhibit, which is currently being displayed in Evanston at the Lorraine H. Morton Civic Center. I heard about this exhibit through word of mouth, so I mistakenly thought that it was about the CTA’s Red Line. Instead, it delved into Chicago’s history with redlining, a practice used by banks to deny loans to minorities and devalue areas based on the presence of people of color (POC), especially Black folks, via color-coded maps. It is necessary to note that, while redlining and its effects are highly visible and impactful in Chicago, it is a ubiquitous problem, and has been since the conception of redlining maps in the 1930s.

A primary takeaway of the exhibit was the way in which racism became purposefully encoded into everyday structures and systems through redlining. “Redlining embodies a process that transformed explicit racism into structural racism […] The structural situation created by these programs largely remains the same” (Undesign the Redline, 2019). And indeed, these structures and their impacts continue on; the exhibit included four superb maps that centered on mobility, education, economic security, and health & wellbeing. The connection between redlined areas and these categories became apparent as the redlined maps were layered over present day data on these categories, allowing the viewer to see that, for example, mobility is incredibly low in previously redlined areas (see map gallery above).

The second photo shown in the gallery above is a 1939 map of the “Homeowners’ Loan Corporation Residential Security Map,” which shows small yellow push pins. These pins are placed by visitors to indicate where they or someone they know lives. This exhibit greatly encouraged visitor participation, from providing sticky notes and pens to post questions and comments on the panels, to asking thought-provoking questions of its audience. One of the questions was “How might redlining play a role in shaping the experiences of people in your community?” This question correctly assumes that redlining continues to shape the experiences of people in their communities, and leaves it to the audience to use the information they’ve gleaned from the exhibit to give their answer.

On one wall, there was an in-depth timeline of racism in the United States, which showed how the U.S. moved from chattel slavery into current manifestations of structural racism. These panels, shown in the gallery above, give necessary context to see those present day manifestations of racism, like the racial wealth gap. In the past, it’s been said that this wealth gap is due to differences in education, employment, and income. These factors have some bearing, but do not affect the wealth gap with as much gravity as intergenerational wealth, something that non-white communities have been deprived of. This disparity resulting from intergenerational wealth (or lack thereof) leads to the following: “[…] Whites have a median net worth ($111,740) nearly 16 times that of Blacks ($7,113), and over 13 times that of Latinx people ($8,113)” (Undesign the Redline, 2019).

In the present day, redlining has morphed from its original shape; this is not to say, however, that redlining in its original form has been completely eradicated. A current example of redlining’s presence can be seen in recent days as Mark Zuckerberg testified in front of the United States House Financial Services Committee. He was being questioned by Joyce Beatty (D – OH) when Beatty commented on Facebook’s practice of withholding certain information from particular communities based on redlined maps. “[…] You are redlining or using zip codes to eliminate people from getting information,” (Webb, 2019). Beatty’s comment manifests a present-day use of redlining that is more covertly racist than denying people home loans based on race.

This exhibit had a wealth of information on practices beyond redlining used to systematically oppress minorities, including blockbusting, predatory banking, contract buying, and speculative investment, all of which are shown and explained in the gallery above. These policies are explicitly racist and were intended to be so from the beginning; when classifying neighborhoods, words like “Foreign Born,” “Relief,” and “Negro” would be used to describe the residents and subsequently redline them, causing disinvestment. “Any threat of foreign born, negro, or lower population? If so, indicate these by nationality and rate of infiltration like this: ‘Negro – rapid’” (Undesign the Redline, 2019).  Aside from the overtly racist language used, surveyors were instructed to describe the “rate of infiltration” as though people of color were the enemy, and committing a crime by simply residing in certain neighborhoods.

Although this exhibit mainly focused on presenting and outlining the history of redlining and other discriminatory practices, there were also suggestions to remedy it. “Redistributing, regenerating, and recirculating needed resources” (Undesign the Redline, 2019) were all listed as ways to un-design redlining, as the title of the exhibit stated, and reinvest in disenfranchised communities. It is possible that the suggested solutions were kept vague in order for viewers to engage with the concepts and potentially think of their own solutions, as the exhibit provided space to write suggestions on a provided space at the end.

The only thing that I would change about this exhibit is its accessibility; it was so well done that I would love to see it in schools and libraries all over Chicago, rather than being tucked away on the third floor of Evanston’s civic center. In fact, my friend and I were looking for the exhibit and asked multiple people if they knew where the exhibit was, only to find out that most people didn’t know it existed. This being said, I absolutely recommend taking a day trip to visit. As a practice in thinking geographically, take notice of who is occupying certain spaces while in Evanston, and conversely, who is not occupying them. In thinking like a geographer, perhaps you can use some of the information from this blog and WE’s Undesign the Redline exhibit to contextualize your findings.

Undesign the Redline was produced by WE, a social impact design studio. Check out their website for more information on their work and projects. http://www.designingthewe.com/

My name is Julie Watkins and I am the Geographic Society of Chicago’s 2019-2020 intern! Today I’d like to share with you our upcoming event, BioBlitz Big Marsh. For those that are unfamiliar, a BioBlitz is defined as “an intense period of biological surveying in an attempt to record all the living species within a designated area.”¹ This is the GSC’s second time doing a BioBlitz at Big Marsh with the intention of logging the area’s plants and animals via the free app, iNaturalist. This event is free and open to all! Please be sure to RSVP “Going” on the Facebook event. We look forward to seeing you on September 14th! Facebook event link: https://www.facebook.com/events/348660959357508/

A Brief History of Big Marsh

Big Marsh can be found in the Calumet Area Reserve on the Southeast side of Chicago. As Chicago’s 564th park, Big Marsh earned its designation as a park in 2016 after being used as an industrial site in the late 1800s.² Laden with nine steel mills, this industrial site turned the wild and beautiful marshland into a wasteland filled with slag.³ The Chicago Park District acquired all 278 acres of Big Marsh in 2011, and Friends of Big Marsh has been working with the Chicago Park District ever since to create a site of eco-recreation.

An eco-recreation site is a site dedicated to habitat restoration as well as leisure and recreation for neighboring communities. For example, Big Marsh’s successful bike park, modeled after Valmont Bike Park in Colorado, is built atop remaining slag from the steel mills.³  Other popular activities to engage in at Big Marsh are hiking, birdwatching, and fishing. Called a “mecca of biodiversity” by Lauren Umek, project manager at Chicago Park District’s Department of Cultural and Natural Resources,³ Big Marsh is a prime spot for a BioBlitz, and certainly sets the bar high for other eco-recreation sites.

I hope you enjoyed this brief history of Big Marsh, and I look forward to sharing more events, blog posts, seminars, Travelogues, and the like with you all soon!

[3] Schulman, Ben. “How Chicago Turned an Industrial Waste Site Into a Nature-Loving

BP is sponsoring 3 international Global STEM Academies for a total of 100 international students. These 4-week summer programs in Chicago, Cairo and Brazil are offered in partnership with AFS Intercultural programs.

AFS-USA is looking to hire 2 educators who will deliver STEM program curriculum to the Chicago program. The student group consists of 30+ scholarship students, ages 15-17, from countries like Egypt, South Africa, Germany, China, India, Mexico, Brazil, etc. The program design has classes in the morning from 9 a.m. – 12 p.m., and students will have related hands-on type activities and excursions with Program Counselors in the afternoons and evenings to reinforce and give additional exposure to the STEM topics.

Teachers will facilitate two morning classes (9 a.m. -10:25 a.m. and 10:35 a.m. -12 noon) each with approximately 15 students. Scholarship winners are expected to have a medium to high level of English comprehension and will all be non-native participants.

The themes of each week are:

Teachers should be able to design curriculum for these topics. Once engaged, teachers will work closely with me to further develop the overall program content and to meld the classwork with the afternoon and evening program.